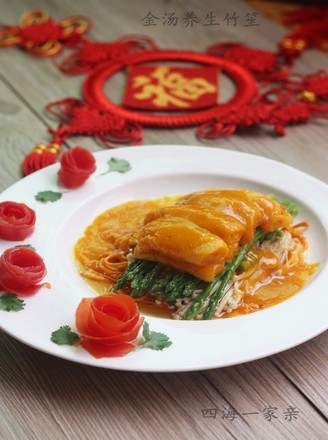 [Jintang Health Zhusheng] I prepared this year’s New Year’s Eve dinner for a pre-drilling exercise. I bought 3 bags of Zhusheng and practiced it several times with different ingredients. At present, there is one bag left for the New Year’s Eve dinner to make a healthy vegetarian food for my family.
[Golden soup and healthy bamboo fungus] I have tried several kinds of matching ingredients, and I like the dishes very much. [Jintang Health Bamboo Fungus] It uses bamboo fungus, cordyceps flowers, enoki mushrooms and asparagus, so I call it a healthy bamboo fungus. In order to match the festive atmosphere of the Chinese New Year, I use pumpkin and Jinhua ham to make a broth with a golden feel. On the one hand, it enriches the taste, and on the other hand, this dish means full of gold and jade, full of blessed sun, full of gold and silver, and the upper layer of the shape implies step by step! Health and safety are the greatest wealth in life. I prefer to take the [Golden Soup Health Bamboo Sheng] as the meaning of bamboo for peace and wish everyone good health, peace and happiness! 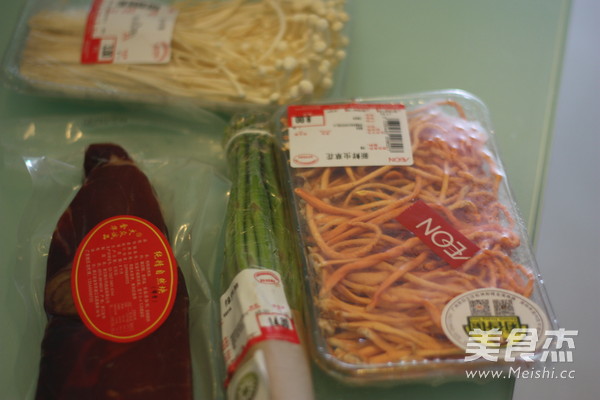 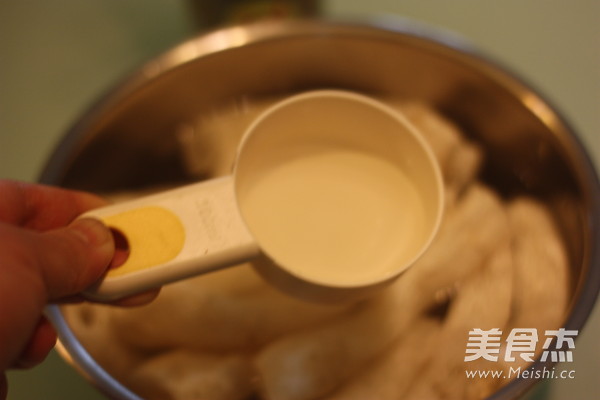 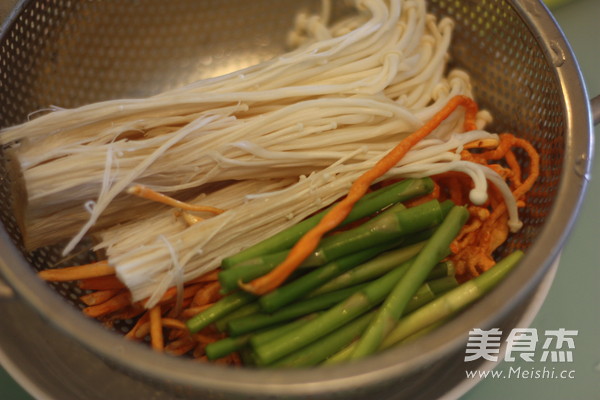 5. After boiling water in the wok, add oil and salt, add cordyceps flowers to boil, pick up and place on a plate 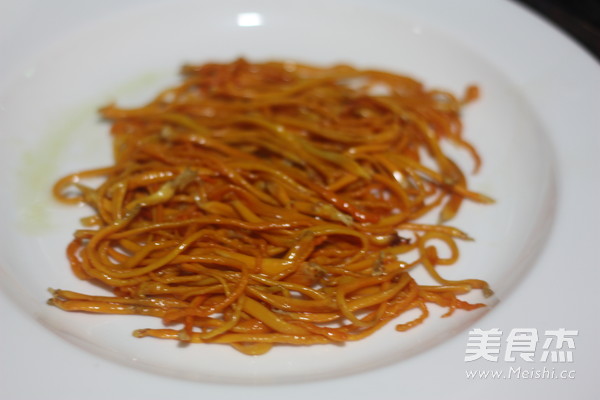 6. Blanch the enoki mushrooms and place them on the cordyceps flower 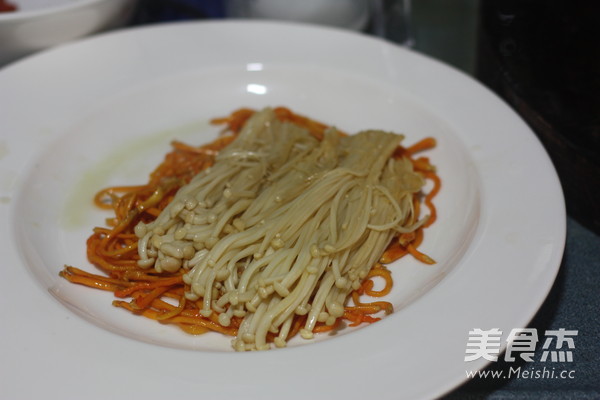 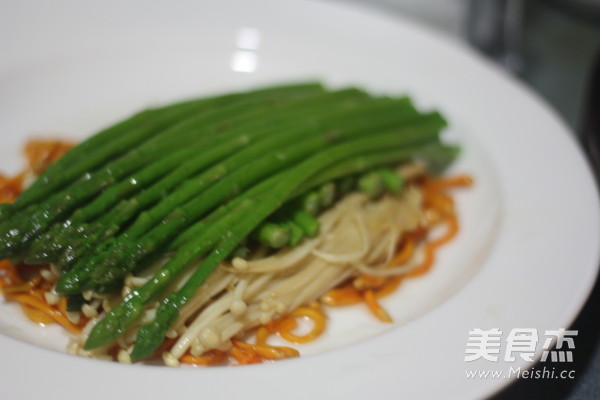 8. To make golden soup, peel the pumpkin and cut into pieces, put it in the microwave on high heat for 3 minutes, take out and press into pumpkin puree 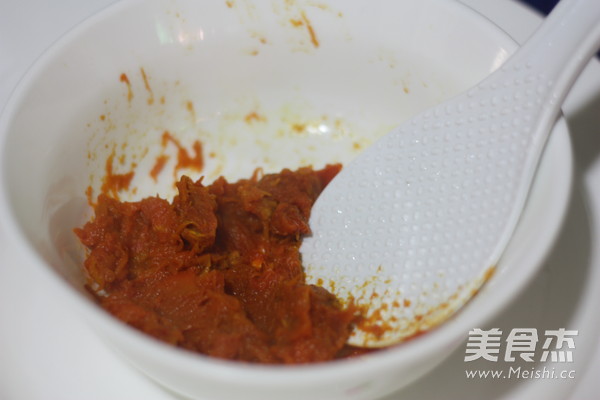 9. Put 1 spoon of olive oil in the wok, saute the garlic, Jinhua ham and pumpkin puree 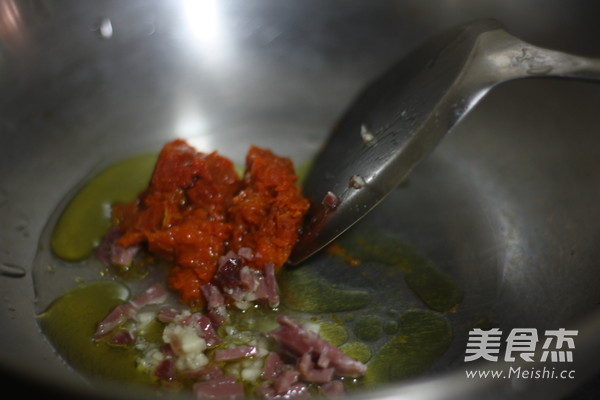 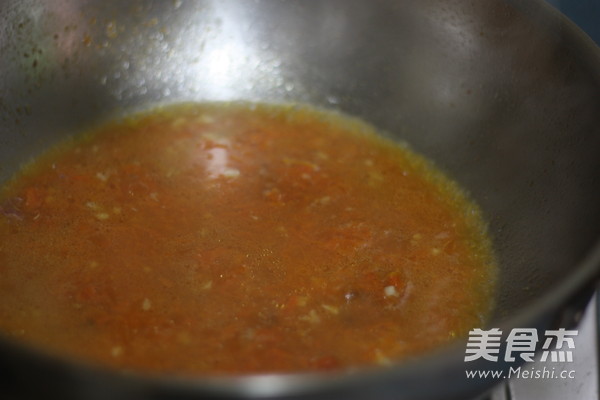 11. Put the ingredients in the pot into the cooking machine and stir into pumpkin and ham minced 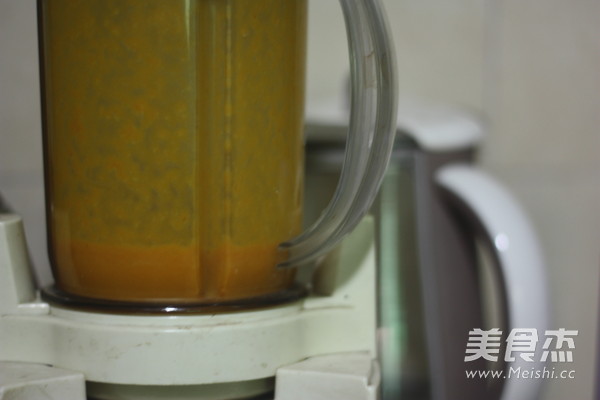 12. Pour the pumpkin and ham minced into the wok, add the broth and bring to a boil 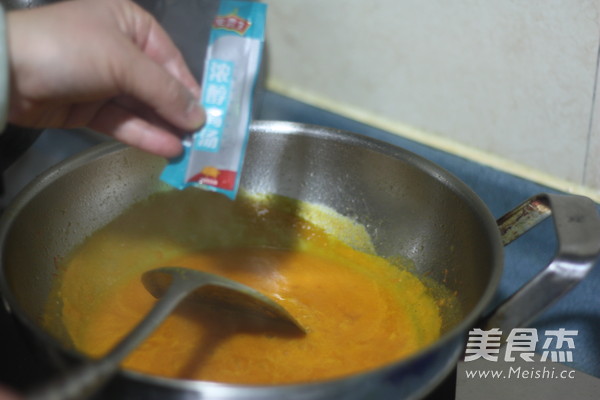 13. Put the bamboo fungus in the pumpkin and ham paste, cook it, take it out and place it on top of the asparagus 14. Finally, pour the pumpkin stock on top of the bamboo fungus 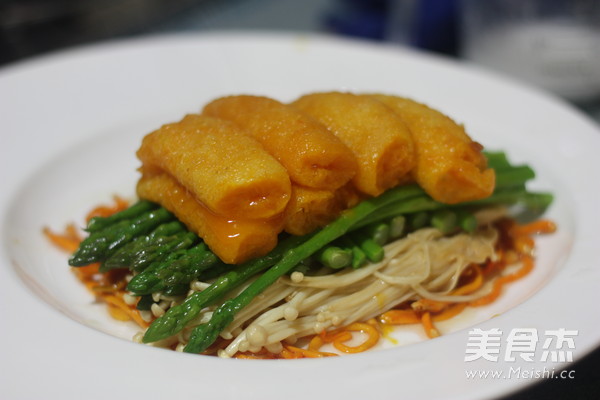 15. Garnish before serving. Cut the tomatoes into long strips with a knife, roll them into a rose shape, place them next to the plate, and decorate with two coriander leaves. 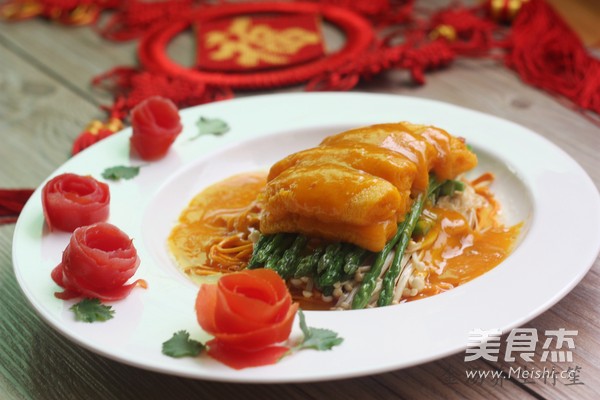 1. First use white vinegar and then salt to ensure that the edible bamboo sheng has no peculiar smell and keep the crispy taste of the bamboo sheng.
2. Do not blanch enoki mushrooms for more than 1 minute.
3. Asparagus can be used to make salads. Don't put it in boiling water for more than 2 minutes. When blanching the asparagus, put oil and salt in the boiling water. 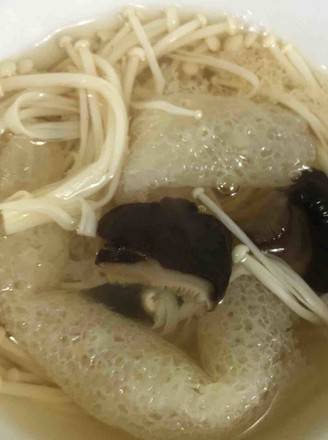 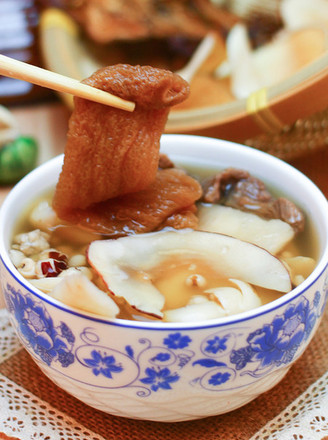 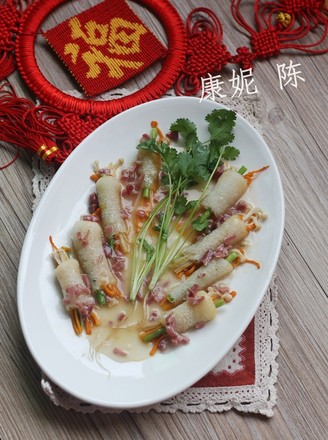 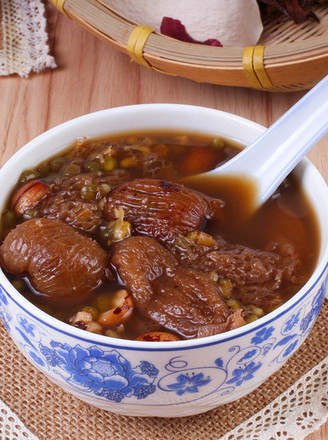 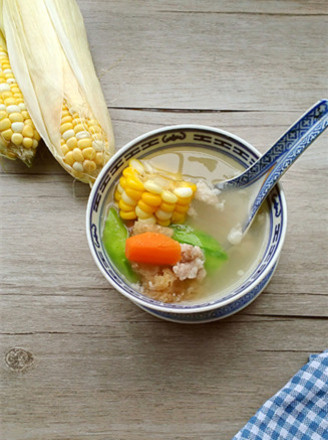 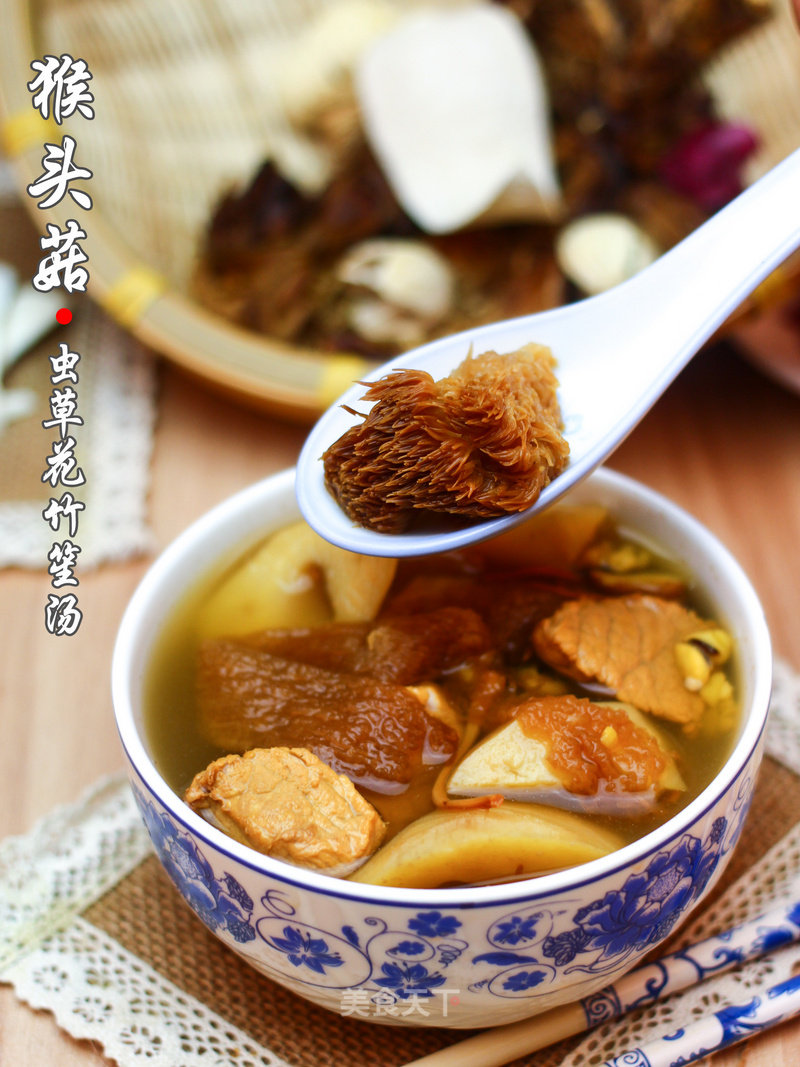 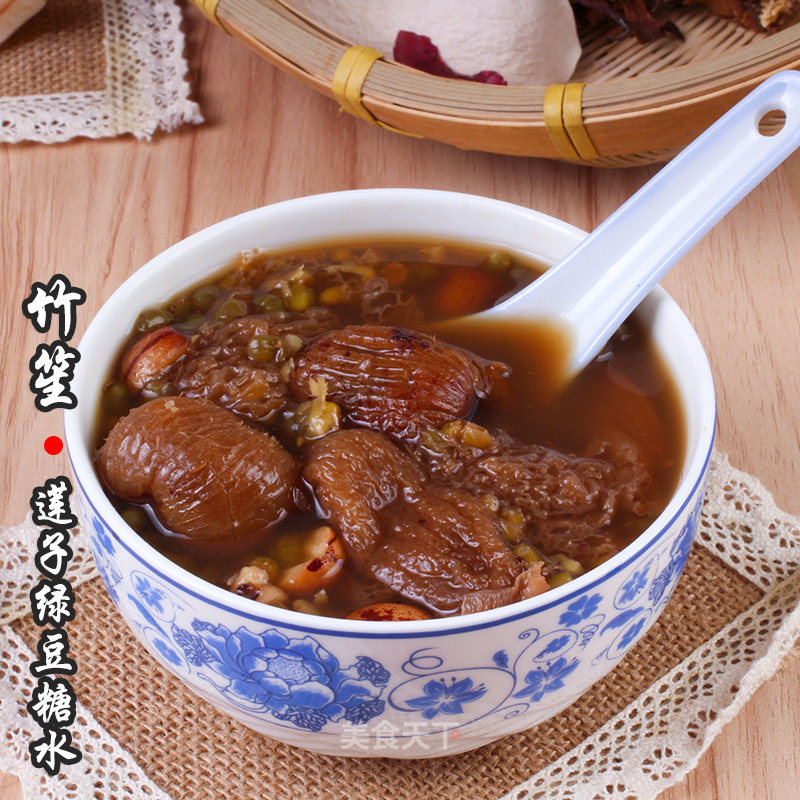