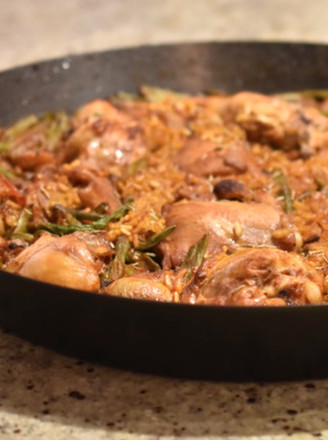 Speaking of Spanish cuisine, is the famous risotto the first thing that comes to mind? Today I will teach you how to make an authentic Spanish risotto!

Spanish risotto, also translated as Spanish cauldron, originated from Valencia, Spain. It means "pot" in the local language (from the Latin patella). In Spanish, paella refers to this kind of rice, and the rice is made. The pot is called paellera. This meal is food for Sunday and Falles.

Spanish risotto is the food for outings in Spain in spring and summer, and it is usually the adult males in the family who are in charge of cooking.

In the Valencia region, there are large gatherings-whether it is festivals (especially the Faye Fire Festival), elections, or protest demonstrations, they need to make a lot of meals, sometimes even to break the Guinness World Record.

Today I will introduce this recipe to you in detail. I hope you can try this delicious Spanish-style food for yourself!

1. First, we cut the kidney beans and cowpeas into inch pieces. 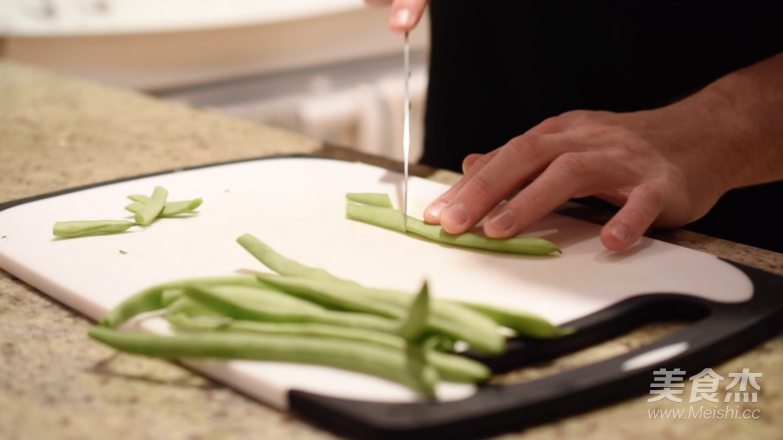 2. Next, cut the artichoke heart into four pieces. 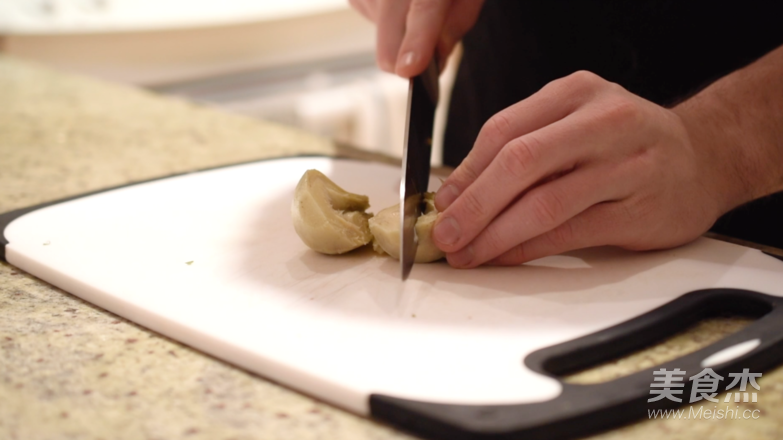 3. The garlic is flattened, peeled, and finely chopped. 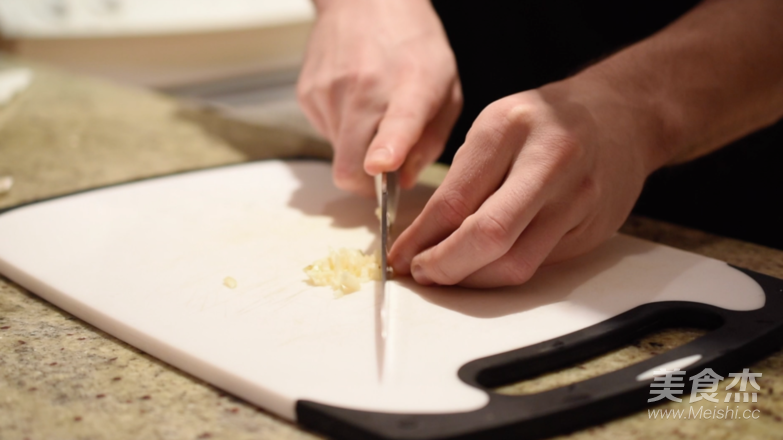 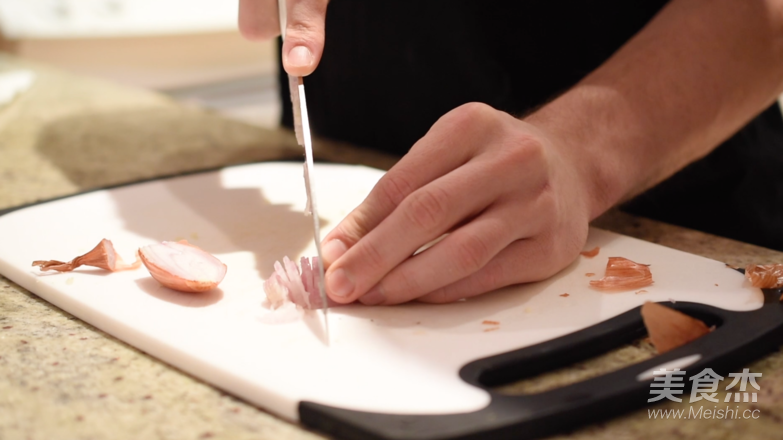 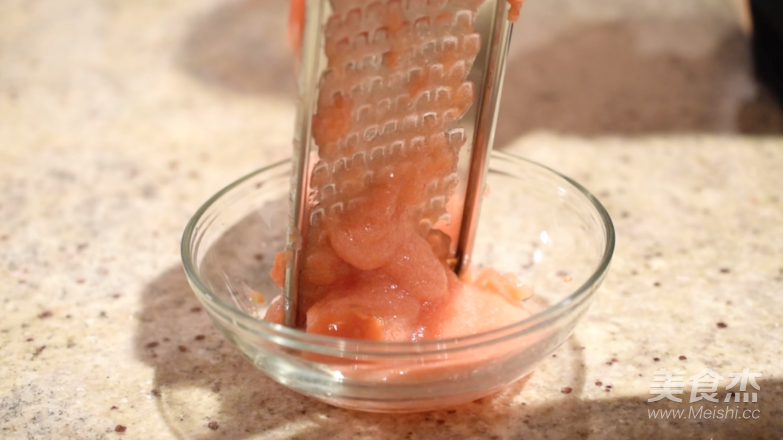 6. While cooking, we add the clear chicken broth to the soup pot and heat it over a low heat until it boils slightly. 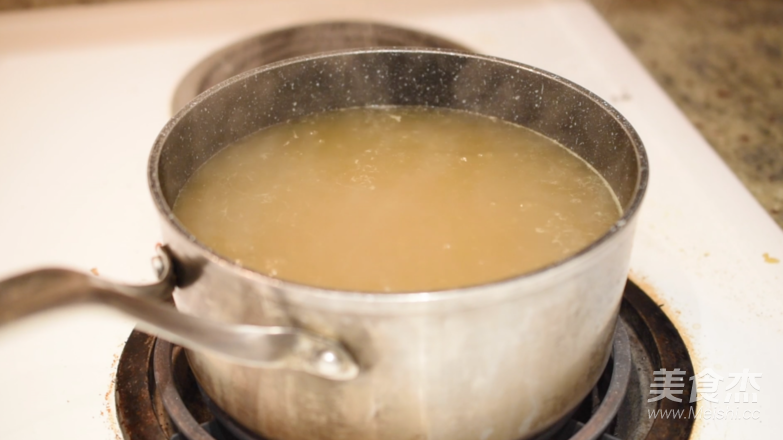 7. Add a little extra virgin olive oil and a little salt to the risotto pot. 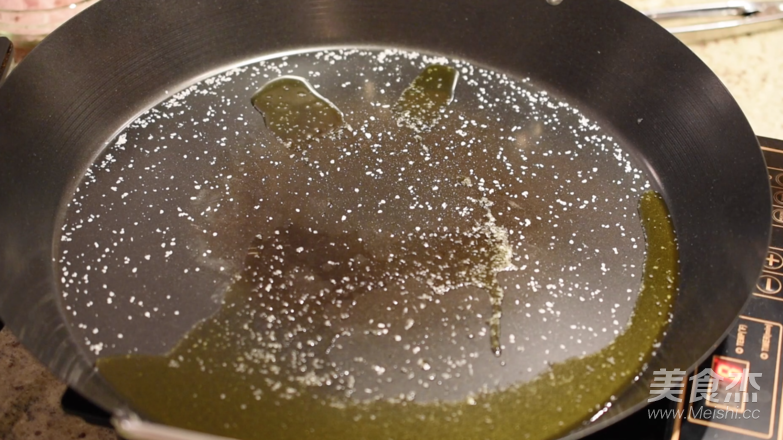 8. After the oil heats up, add the rabbit meat and chicken thighs. 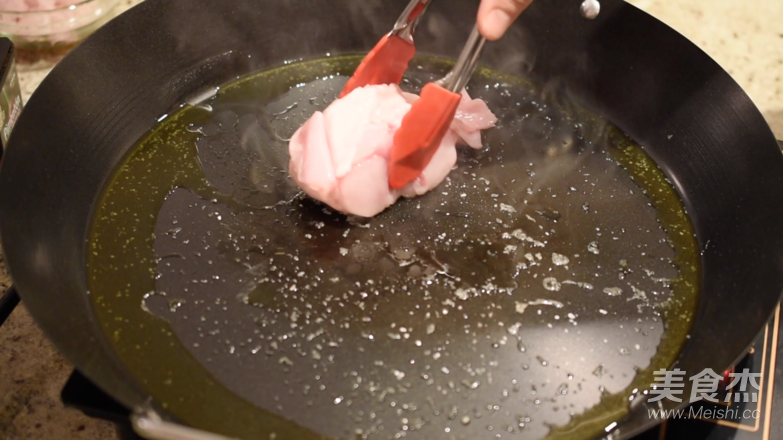 9. Fry one side and then turn it over, fry until the rabbit and chicken thighs are slightly browned on both sides. 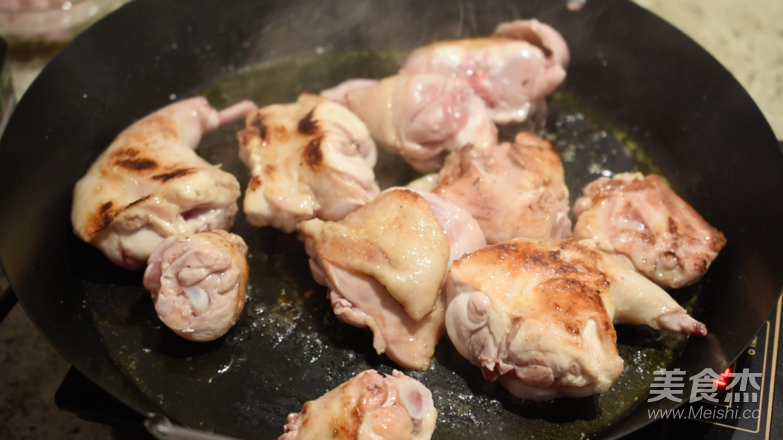 10. After the rabbit and chicken are fried, add the chopped beans and stir-fry for a while. 11. Next, add the chopped shallots and garlic and continue to stir-fry until the aroma comes out. Then, add the artichoke hearts and stir fry for a while. 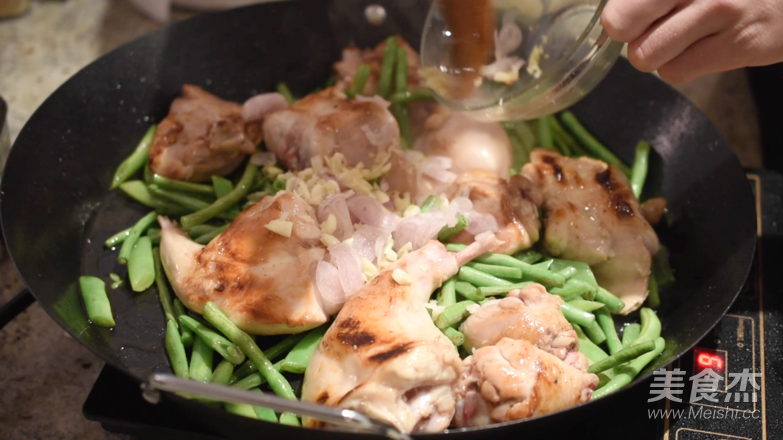 12. Next, we need to add a very important condiment: smoked paprika (smoked paprika), stir fry a little, so that the paprika fully wraps the ingredients in the pot. 13. Next, add the grated Roma tomatoes and continue to sauté. 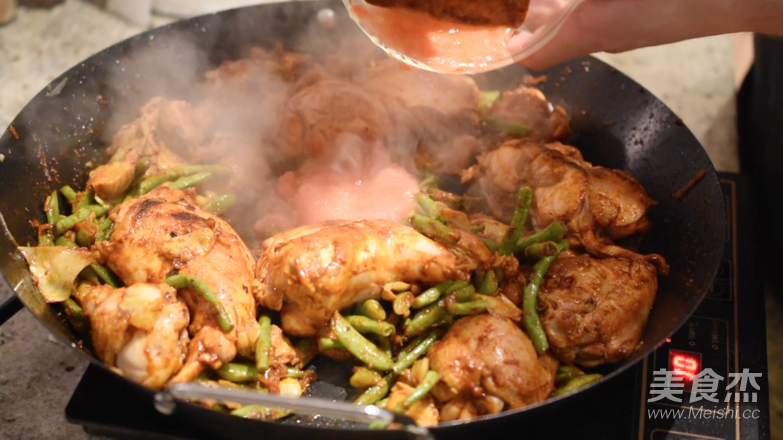 14. Then, pour the preheated chicken broth, some saffron, and bumbami into the pot. 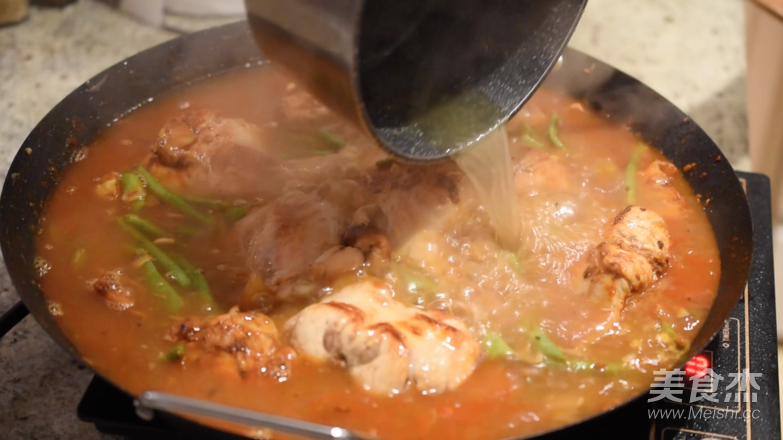 15. Stir gently, so that all the rice grains are immersed in the soup as much as possible. 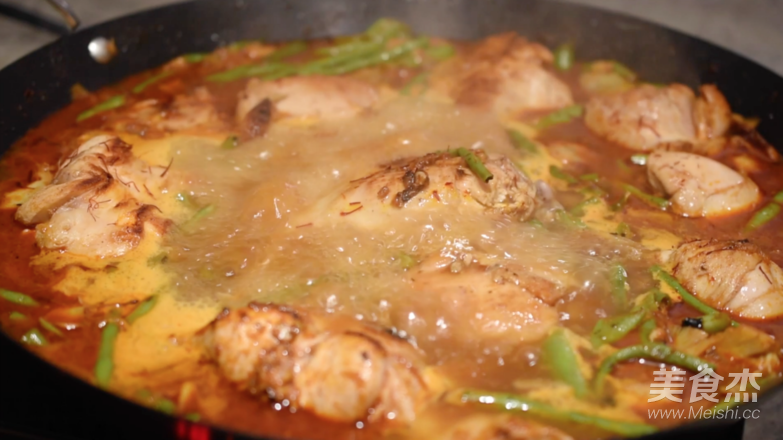 16. After that, everyone can no longer stir the food in the pot. 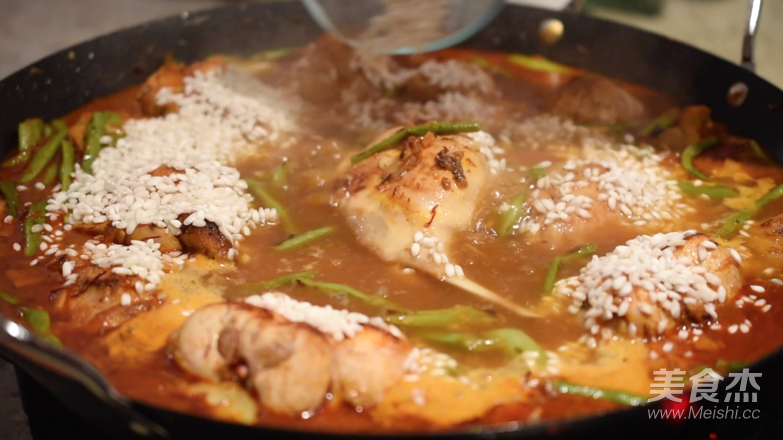 17. We first boil the ingredients in the pot on high heat for 10 minutes; then lower the heat to medium and continue to cook for 15 to 20 minutes. 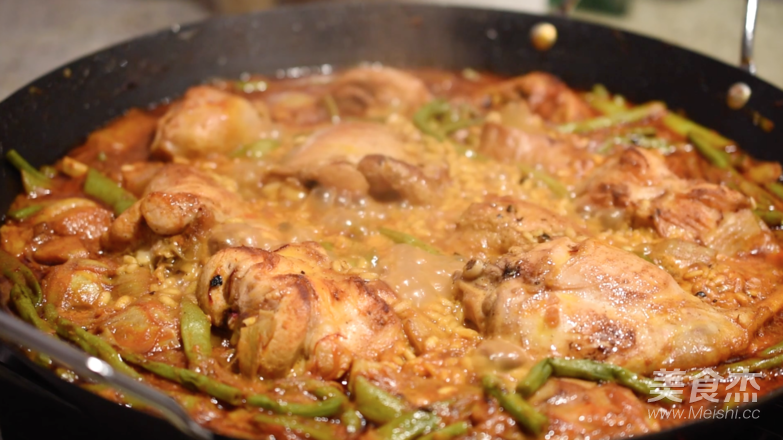 18. Finally, cover the opening of the pot with tin foil, turn to a low heat and continue to cook for about 10 minutes, until the liquid in the pot is absorbed by the rice and a layer of crispy rice forms at the bottom. 19. After the risotto is cooked, sprinkle some rosemary on the surface while it is hot. 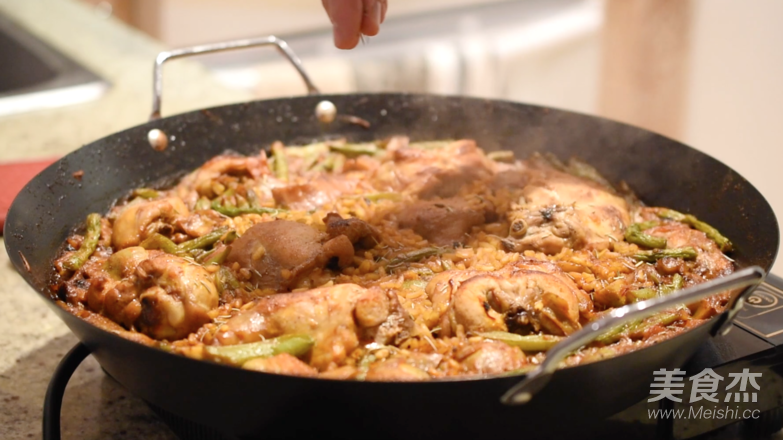 20. Divide the risotto on a plate, share it with family and friends, and you are ready to eat! 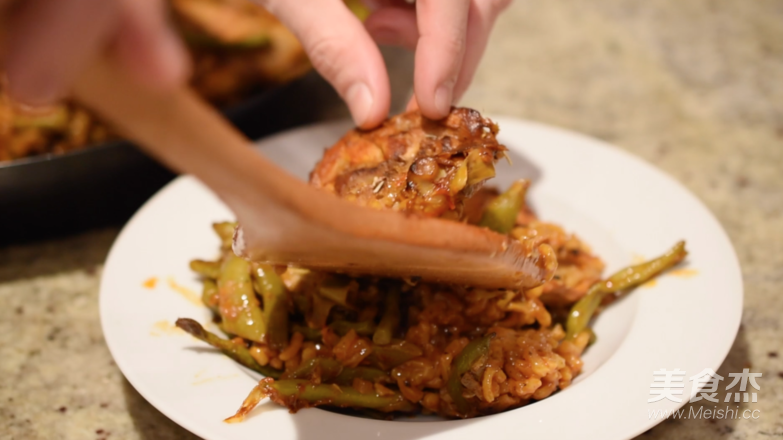 21. A large pot of risotto is enough for three to four people. The rabbit meat, chicken and beans are very soft and juicy. The rice fully absorbs the aroma of smoked paprika and saffron. It is delicious to cry! Everyone must try! 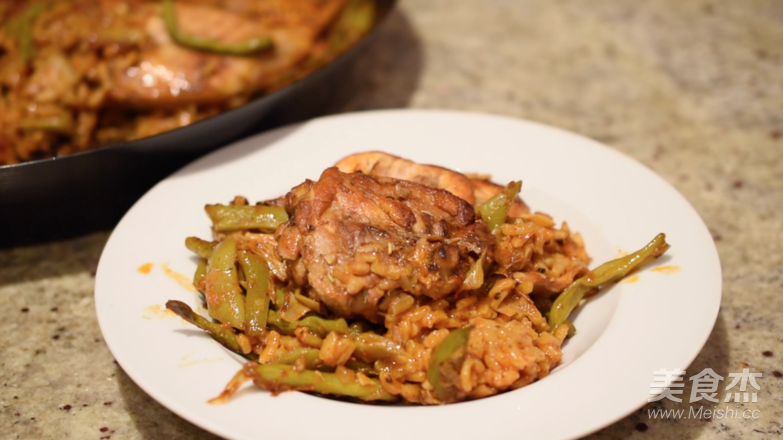 1. Saffron
Crocus, also called saffron, saffron. Saffron and saffron are only one word difference. Conceptually they are often mistaken for the same name. Some people also regard the saffron that has been introduced and cultivated in Tibet as saffron. In fact, these are two completely different plants. The price of saffron is much cheaper than saffron, the price of saffron is 10 times that of saffron. At the same time, the effect of the two is very different.
Saffron is the most expensive spice in the world. It takes about 16,000 saffron to collect 100 grams of pistil stigma, because each purple saffron has only three stigmas, and the stigma must be obtained before sunrise The picking is done manually to prevent the flowers from wilting and losing the harvest value. After harvesting, they must be dried and dehydrated before they can be classified and sold.

3. Rosemary
Rosemary is one of the most common western spices. Fresh rosemary branches are similar to pine branches, with a pungent smell, pine aroma, and bitter taste. After drying, the flavor is not as good as fresh branches, but it is still fragrant and tangy. Rosemary is particularly suitable for making poultry, lamb, stews or roasted potatoes.
"Rosemary" is the English name of rosemary, but this name has nothing to do with the English rose and Mary. It is transformed from the Latin name "rosmarinus" of rosemary, which is derived from "露水". "" (ros) and "海" (marinus) are composed of two roots, meaning "dew from the ocean". Because it is particularly drought-tolerant, rosemary in many places only needs water vapor from the sea to survive.
In the Middle Ages, rosemary was associated with weddings. The bride will wear a rosemary helmet and the groom and guests attending the wedding will wear rosemary sprigs. From this association with weddings, rosemary is considered to have a kind of love charm.
In mythology, rosemary has a reputation for improving memory and is used as a memorial symbol in war memorials and funerals in Europe and Australia. Mourners threw it into the tomb as a symbol of nostalgia for the dead.

4. Bomba Rice
Bambami is produced in Valencia, Spain, on the warm east coast of the Mediterranean Sea. It is a short-grain rice (short-grain rice) mostly used in Mediterranean cuisine, Spanish risotto. The rice shape is short and round, the color is pearlescent and transparent, and the quality is good. After cooking, the grains are distinct and the taste is soft and hard.
Because it is difficult to buy Bambami in the market, you can choose Arborio rice instead, because the characteristics and taste of these two kinds of rice are very similar. If you can't buy both types of rice, you can choose other short-grain rice instead, such as Japanese sushi rice, but it is not recommended to use long-grain rice, such as Thai fragrant rice or Basmati rice. 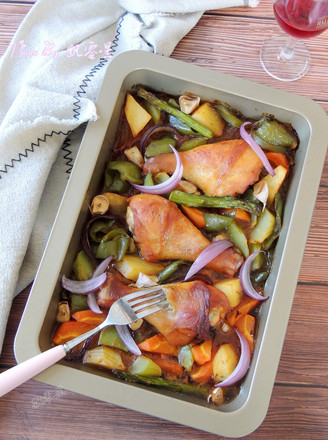 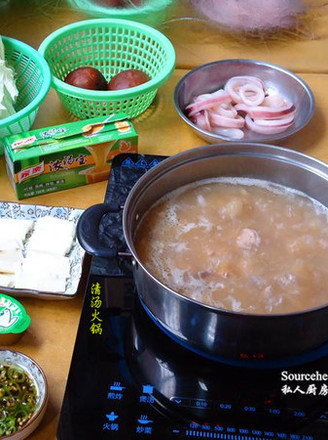 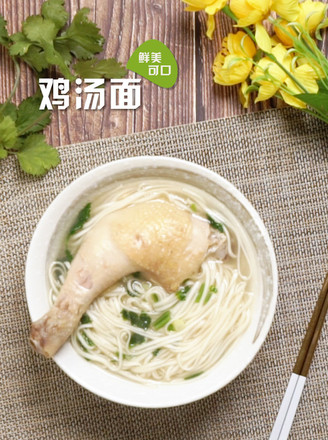 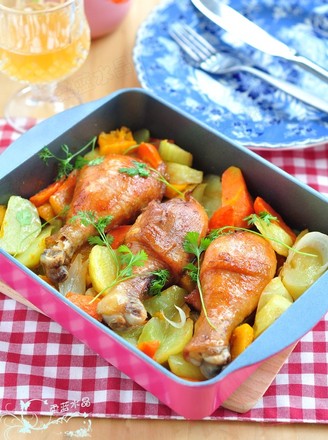 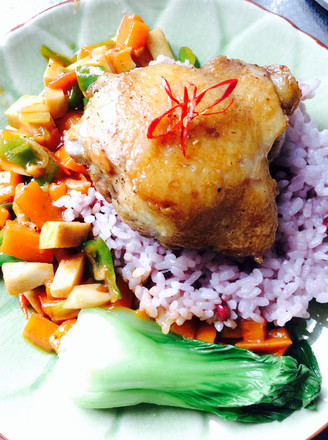 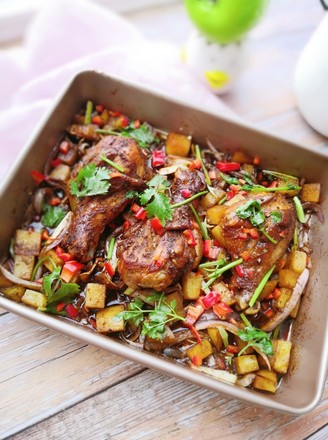 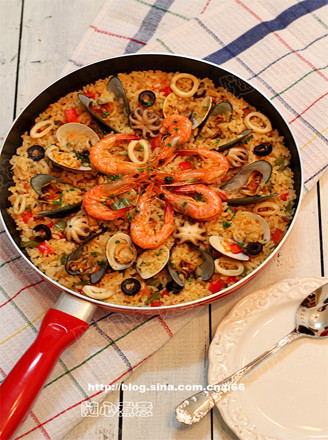