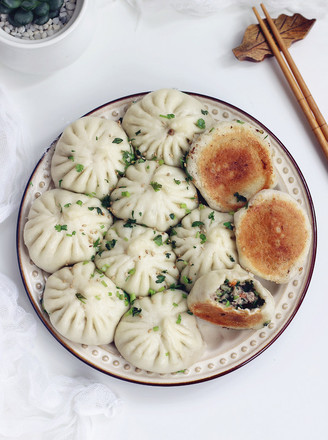 by Looking for Peach Blossom Island

In the summer when the appetite is poor, a pot of fried noodles, a bowl of porridge or soy milk is a very comfortable meal. Compared with ordinary buns, pan-fried buns not only have the same soft outer skin, but also have a golden crispy bottom and juicy filling. Every bite is a big satisfaction.

It is said that it is fried in water, but it is actually steamed at the same time as it is fried. As for how to do it, let's take a look.

1. Pour cold water, yeast powder and high-gluten powder into the mixing bucket of the chef's machine. It is more labor-saving to mix the noodles with a chef machine and does not require hands. 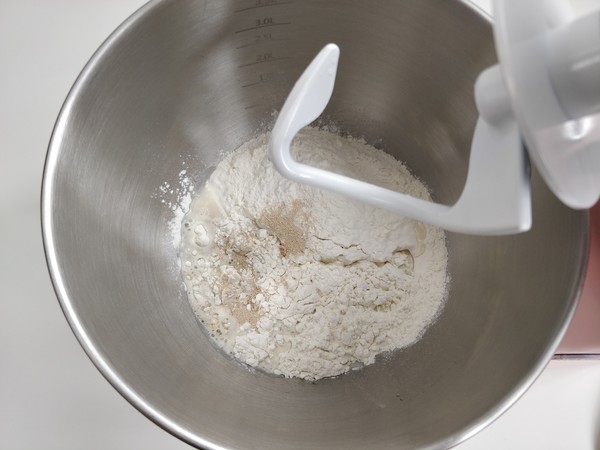 2. Install the dough hook and start the low-speed gear. After about 3 minutes, a smooth dough is formed. For this step, I used the Petra PE4800 chef machine. If you use other machines, the selected program and time will be changed. 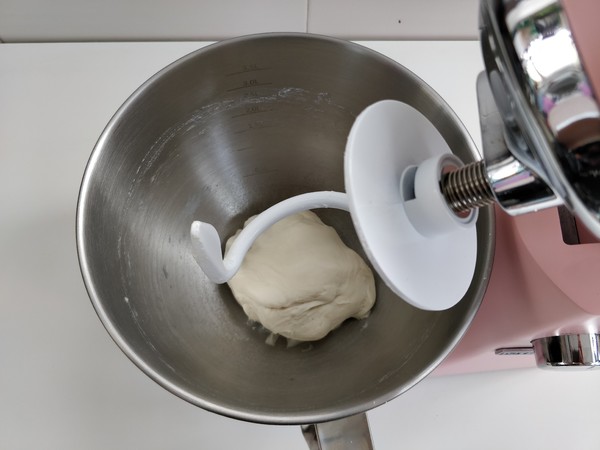 3. Put the mixed dough in a basin, cover with plastic wrap, and ferment at room temperature or in the oven to double its size. If the room temperature is high, it will take about 40 minutes. Need to pay attention to the state of the dough, over-fermentation will produce sour taste, and also affect the cooked taste. The method to judge the fermentation state: Use your fingers to make a hole on the top of the dough. If the hole does not shrink and the dough forms a honeycomb-like fine structure, it means that the fermentation is complete. 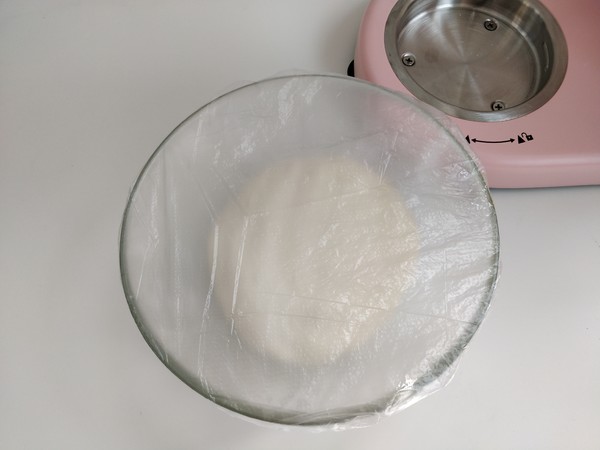 4. As the dough rises, start to mix the stuffing. Wash the leeks and cabbage leaves and chop them, set aside for later use. After the carrots are washed and chopped, add a little vegetable oil to the wok and fry them until they are broken, and then pour them into the vegetable stuffing together with the oil in the wok and mix well. Cooked carotene is more easily absorbed by the body and has a better taste. If there is an accessory for the chef to cut vegetables, this process is even simpler. 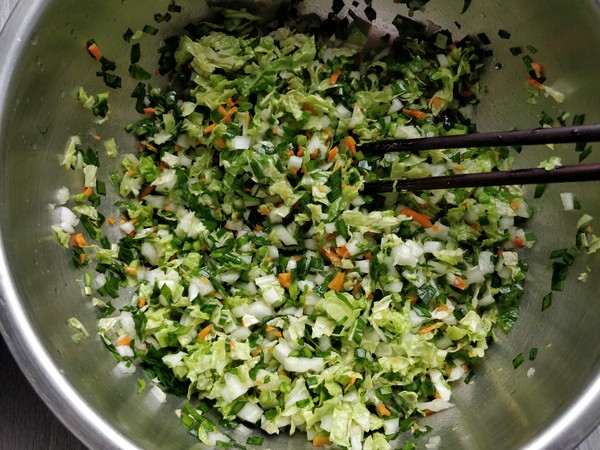 5. Cut the pork tenderloin into thin slices, then cut into thin strips, finally cut into cubes, chop into meat fillings, add salt, cooking wine, light soy sauce, thirteen spices, chicken powder and water, and pour them into the mixing bucket of the chef's machine. This step will be easier if there is a cooker machine for meat grinder accessories. 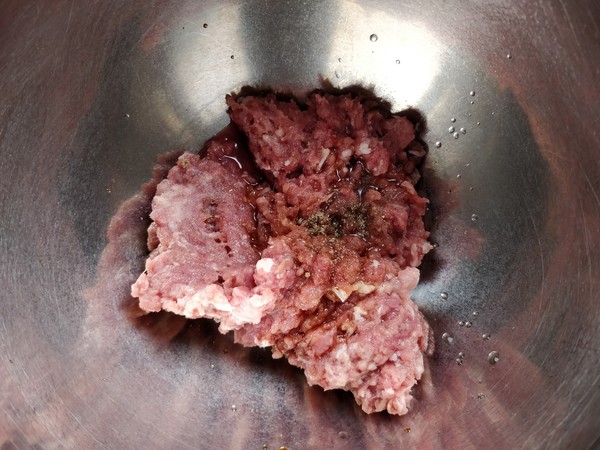 6. Install the K paddle in the cook machine, pour the vegetable stuffing into the mixing bucket, select the 2nd gear and mix well for about 1 minute. For this step, I used the Petra PE4800 chef machine. If you use other machines, the selected program and time will be changed. 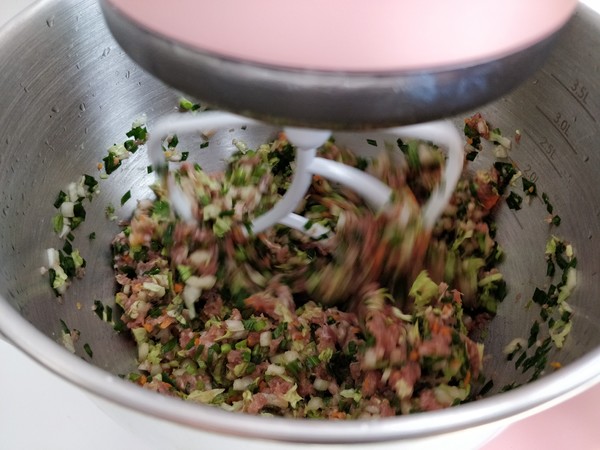 7. Pour out the mixed stuffing and set aside to taste. Put the fermented dough into the mixing bucket of the cook machine, install the dough hook, select the 3rd gear to start for about 3 minutes, and complete the exhaust of the dough. 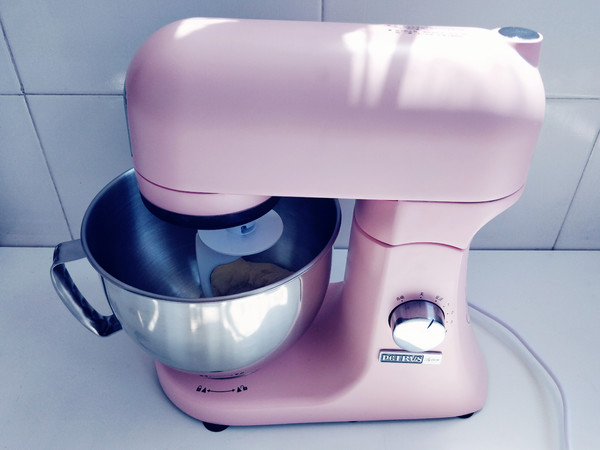 8. Take out the dough, let it stand for 10 minutes, knead it into long strips, cut into suitable size agents (20-30g each), and roll them into a thicker middle and thinner round pieces on the sides. The noodles can make the dough texture more fine and even. 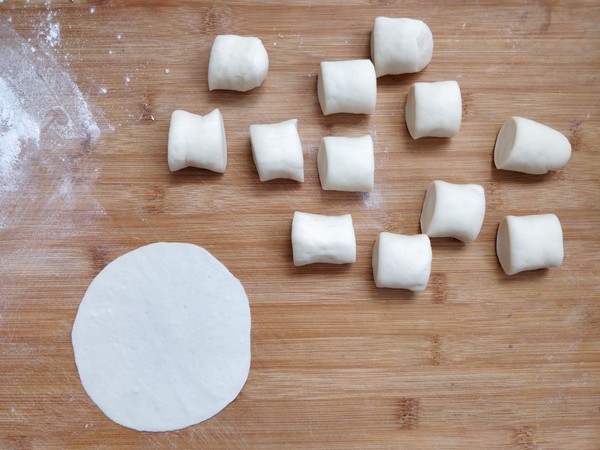 9. Lay a spoonful of stuffing in the middle of the dough, support the bottom with your left hand, push the edge of the dough in a clockwise direction with the index finger of your right hand from the outside to the palm of your hand, and then pinch the dough together with the middle finger of your right thumb, rotate while pinching, and use your thumb together Push the stuffing inward, halfway through the operation, and the shape of a bun like a small pocket in the picture is formed. 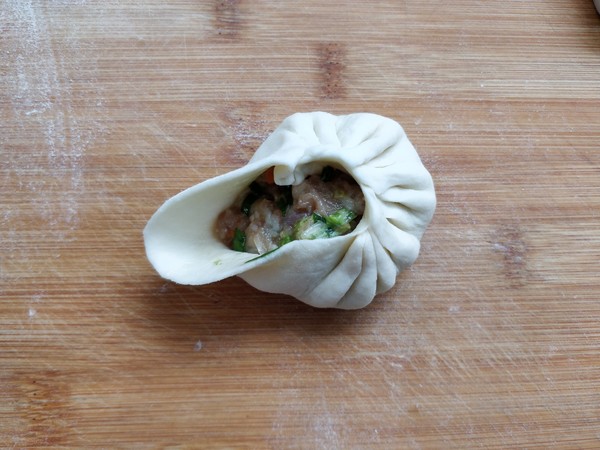 10. Follow this operation to complete one rotation, and a small bun will be wrapped. There will be a small hole in the middle. After the second fermentation, the dough will be squeezed towards the middle and the small hole will be filled. You can also manually knead the dough around the small hole to form a small tip. 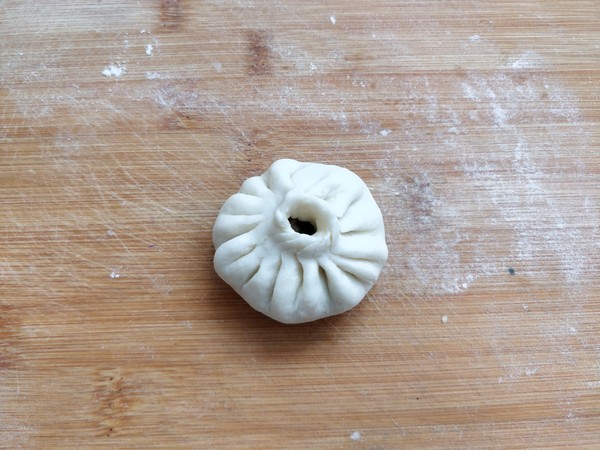 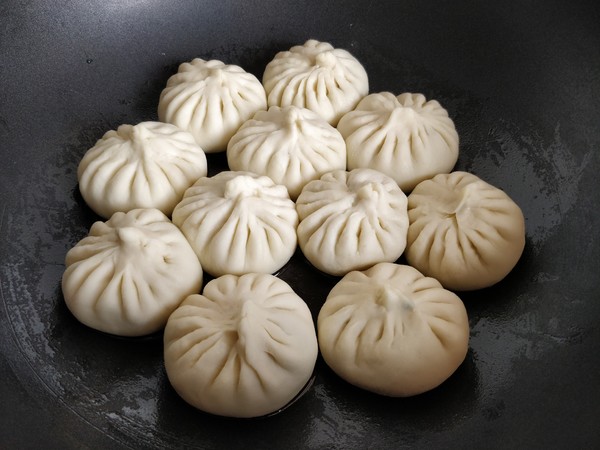 12. Turn on a small fire and fry the bottom of the buns until they are shaped. Pour a little boiled water along the side of the pot, quickly cover the pot, the steam in the pot will steam the buns.
How to judge the bottom of the frying until the bottom is shaped: shake the non-stick pan gently, the stuffed buns will form a whole, and move slowly in the pan, indicating that the bottom has been shaped and there is no adhesion. 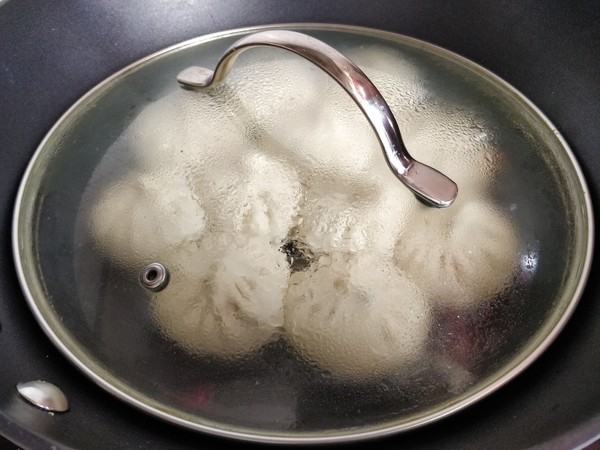 13. Keep the fire low, add hot water again, cover the lid and simmer until the buns are cooked through, sprinkle a little green onion and cooked sesame seeds on the surface to serve.
Tips: Be sure to fry the bottom until the shape is finalized before adding water. Do not add too much water each time until the hot water completely evaporates into steam. When there is no residue in the pot, add it again. Generally, add water twice to be fully cooked. 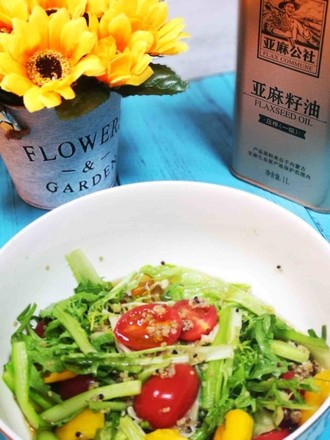 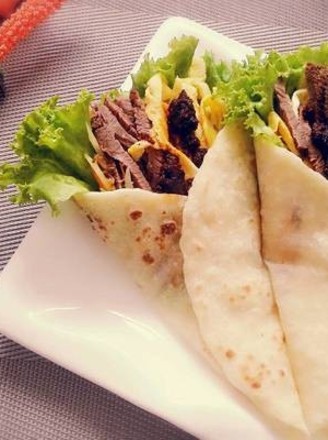 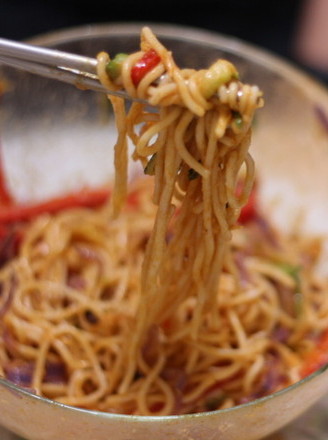 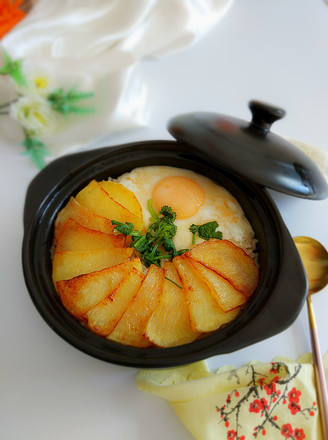 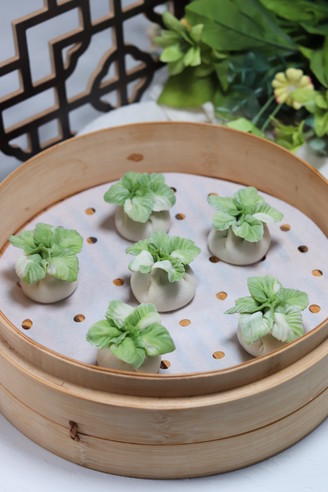 Steamed Dumplings with Emerald Cabbage~winter Solstice with Food for Warmth, Eat Dumplings and Freeze Them 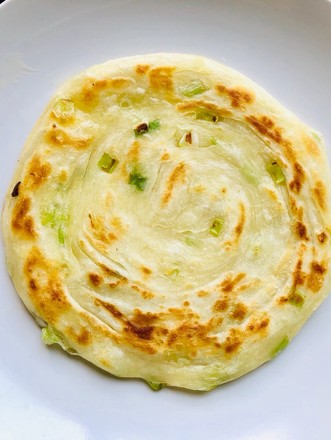